The project is divided into 4 phases:

1. Bibliographical research into evidence of Yazidi sites in the region; contact with Yazidi organizations; study of satellite imagery of evidence of Yazidi sites so as to identify places to be visited during a future field survey (which for the time being has unfortunately not been authorized by the Iraqi authorities). The project’s first phase has focused on research into Yazidi sacred buildings, which can be identified as mausoleums and shrines. These Yazidi religious buildings have been studied in four main ways: i) contact with Yazidi organisations, i.e. the Eyzidi Organization for Documentation, ii) bibliographical and Internet searches, and iii) examination of satellite imagery. Contact with Yazidi organisations operating in Kurdish territory has been essential for obtaining precise and detailed information about the places that have been included in the second phase of the work – the survey of Yazidi monuments and structures. It has also been important to contact members of the Yazidi community, in some cases in countries outside Iraq, in order to include their oral testament and legacy. The link between the information gathered from bibliographical research and information from reliable, up-to-date websites that register damage to the archaeological and cultural heritage – for example, ASOR Cultural Heritage Initiative – was critical in this phase.

On this basis, the Yazidi monuments have been divided into different types, for example shrines and mausoleums. The division into site categories has served as a basis for the description of the structures in the following Phase 2.

At the same time, the project’s topographer and remote-sensing specialist has analysed available satellite imagery (Corona and more recent images that can be found on the Internet). The data collected have been integrated into a GIS system, which was used in Phase 2.

2. The second phase of the project was intended to be a field survey in the Sinjar region, which would have permitted the location of Yazidi buildings in the field, following the work done on satellite images. Each structure would have been precisely positioned on the map using a GPS receiver and then entered into the GIS system. Due to security problems that resulted in the Iraqi authorities’ refusal to issue a permit, it was not possible to survey the Sinjar region in the field. These security issues concerned the military situation in Sinjar and the region’s instability after the referendum that was held in Iraqi Kurdistan on 25th September 2017. Furthermore, following UN Security Council Resolution 2379 of 27th September 2017, an investigation team was created in order to “support domestic efforts to hold ISIL accountable by collecting, preserving and storing evidence in Iraq of acts that may amount to war crimes, crimes against humanity and genocide committed by the terrorist group ISIL in Iraq” (UNO Security Council Resolution 2379 https://undocs.org/S/RES/2379(2017)). Due to the Sinjar region being part of the area to be investigated by the UN team, and the general lack of security there, it was not possible to carry out our project in the field. Nevertheless, we decided to keep the structure of our work basically unaltered. For this reason, our research has been based on verified information from Web pages, reports and other news about the topic. Invaluable help was provided by our collaborator in the construction of this Website, journalist Jérémy André, who had the chance to visit the Sinjar region in 2016 and to record using photographs, videos and interviews with local people the destruction of Yazidi religious buildings. His invaluable contribution allowed us to obtain photographs and precise data about the preservation state of the sacred buildings that he was able to visit.

The following table lists the religious buildings that we were able to record following the methodology described above (Fig. 2).

4. Creation of a Website. The last phase of the project was devoted to the collection of all available information, which was then published on the project’s Website. On the Website, each Identification Sheet is published, together with pictures and coordinates of the structure described (see example attached). The Website’s purpose is to make the cultural heritage of the Yazidis available to a wide audience, to spread knowledge about the Yazidi community and their history. Another aim – no less important – is to provide the displaced and dispersed Yazidi community a contact with their provenance and places of origin. 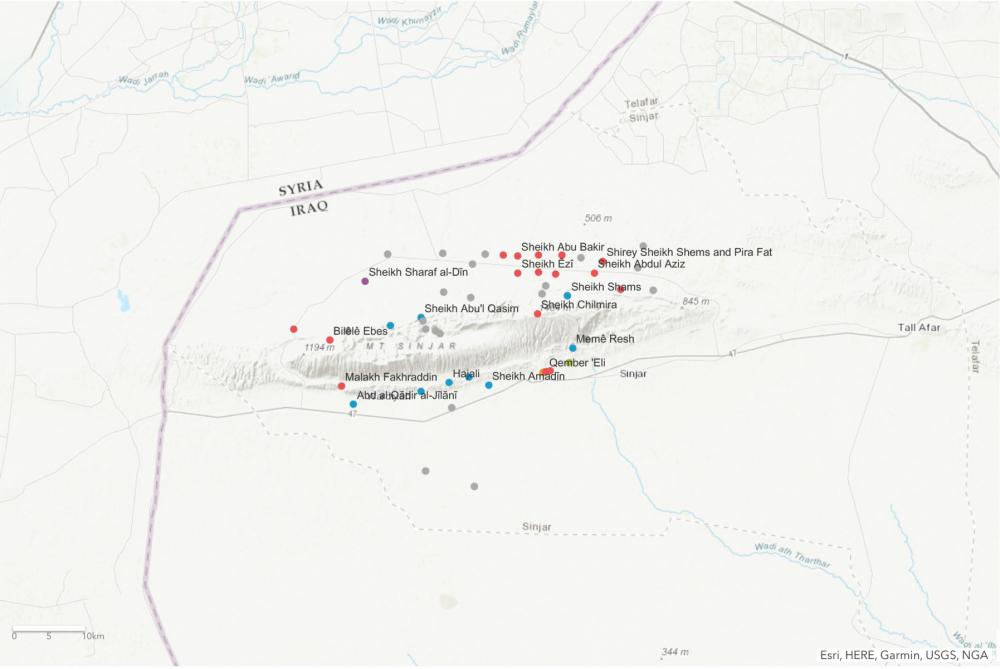