Mausoleums are the most common building type of the surviving monuments of Yazidi architecture (Fig. 2). They are numerous throughout Yazidi territories and are important for their variety and because they are the main places of worship in Yazidi architectural heritage. Each Yazidi village in northern Iraq has its own venerated mausoleum (Fig. 46). Their function is linked to funerary practices; they are burial places, but are also considered places of worship. In this context they are venerated as tombs of saints, who are historical personages important for the foundation and development of the Yazidi religion, or persons who were martyred for the Yazidi cause. Their mausoleums are thus centres of pilgrimage, and are visited on important occasions such as marriage, festivities, illness and death. In the buildings commemorative meals are eaten and prayers said for the souls of the dead. There is also animal sacrifice, mourning, and the lighting of oil wicks in the niches of the mausoleums, during which vows are chanted (Açıkyıldız 2015: 146).

In northern Iraq the mausoleums are called khas, mêr, qubba, marqad, mazār and maqam (Fig. 47a). Khas, mêr and qubba are all domed mausoleums; qubba is used only in the inscription in the foundation of the mausoleum of Sheikh Shams in Memê Shivan. Marqad – place of rest or place of sleep – is used in several inscriptions. Mazār – place of pilgrimage – derived from the Arabic root ziyara, is the term used most for Yazidi mausoleums. Maqam – place of residence – is also used to identify mausoleums.

Mausoleums are one-floor, freestanding small rural buildings, located on top of a hill, beside sacred trees, rocks, caves or springs. They are set within the borders of an open courtyard, which also houses the private cemeteries of Yazidi saints.

It is difficult to date the mausoleums because there are few inscriptions. Some of them have recently been restored, so it is not possible to find clues to their dates. Another difficulty is the use of the same architectural style throughout Yazidi history.

The square plan is the most frequent, which may have derived from Sasanian fire temples, char taq (Hillenbrand 1994: 281; Fig. 47b). The author suggests that the square form of the Yazidi mausoleums was used in the fire temples, then influenced Eastern Christian architecture and then were also seen in Islamic and later, in Yazidi architecture. Following Hillenbrand (1994: 290), it can be supposed that the square plan with dome reached the Yazidis through the Islamic mausoleums of Mosul. The current square plan of the mausoleum of Sheikh ‘Adī resembles the plan widely used in the Shiite mausoleums of Mosul and Sinjar during the Zangid Atabeg period (1149-1261).

The conical dome is the main element in Yazidi funerary architecture (Fig. 48). The interior is hemispherical (Fig. 49): a semi-circle is set above the squinch gallery, creating a gradual transition from the building’s square body to an octagon drum. The arches of the squinches are generally round, in a few cases pointed. The fluted conical external dome is set on multiple-sided drums which vary in number from one to three depending on the dimensions of the mausoleum and the importance of the person to whom the mausoleum is dedicated. The graded drum and multiple-faced fluted cone give a feeling of movement to the monotonous square body. The fluted cone is crowned by a gilded globe – hilêl – to which coloured tissues can be attached (Fig. 50). There are no windows or blind arches on the façades, with the exception of small square/rectangular openings for ventilation. The fluted conical dome is typical of northern Iraq: many scholars interpret this as being due to the influence of the ruler Badr al-Din Lu’lu of Mosul, who was associated with muqarnas domes. Most of the Yazidi mausoleums have 28 ribs. There were probably many reasons for the choice of this form. Conical domes’ height and orientation towards the sky probably attracted 12th century Yazidi mystics as a representation of proximity to God. This form is also regarded as the symbol of the sun, toward which the Yazidis turn to pray. Another interpretation is that in Sufism the image of the sun belongs to the men of religion, the sheikh and the pîr – an image that radiates with their kindness and illuminates their disciples in the faith. The spiritual radiance perpetuates after the death of the master who is believed to be still present with his disciples, influencing and teaching them on the level of the soul. Through its solar form, the architecture represents a place of veneration of the deceased sheikh and pîr.

Doors are relatively small: one has to bow the head to enter, thus expressing a sense of respect (Fig. 54). Doors can be rectangular or flat arched. There is usually one door that gives access to the interior. The tomb chambers of the mausoleums with antechamber have two doors: one communicates with the antechamber in the north, while a second door is located in the eastern wall. This is a particularity of the Sinjar region.

Wall niches are important elements of Yazidi funerary architecture, made for functional purposes. They are small and square or rectangular and are intended as places for pilgrims to burn oil wicks, which are lighted to make wishes. The number of recesses varies according to the size of the building. In the mausoleums in Sinjar there are one metre high votive columns and pillars, called stuna miraza – prince’s column – on which the wish-wicks are burned (Fig. 55).

There is almost no decoration, although in some mausoleums geometric, plant and zoomorphic motifs are found. They are sculpted in low relief on marble and plaster in a limited area, which is usually around the portal (Fig. 56). Snakes, lions and birds are also represented on the façades, but humans are never depicted (Fig. 57). The façades of all mausoleums dedicated to the Yazidi saint Sheikh Mand Pasha are ornamented with the image of the serpent (Açikyildiz 2015: 159). His mausoleums are effective against snakebites (Açikyildiz 2015: 146).

Shrines (nîshan) are small constructions, usually located in the courtyards of mausoleums or in cemeteries as freestanding buildings. They are used as memorials for dead saints and for this reason they are believed to possess the spirit of the deceased (Açıkyıldız 2015: 176). There are no historical sources or inscriptions that date them; they are found only in the region of Sheikhan, only two in Sinjar.

Shrines may be divided into three types: 1) square pedestal covered with fluted conical dome; 2) square pedestal with a simple circular dome; 3) irregular conical form resembling a stalagmite made of clay (Fig. 58). The second type appears in the courtyard of the mausoleum of Sheikh Sharaf al-Dīn in the Sinjar region, and this is the only example in the area. Type 1 and 3 occur in the village of Bozan and in Beban. The main feature characterizing these shrines is the presence of niches in which lighted oil wicks were placed by pilgrims. This function is similar to that of some Zoroastrian shrines: some scholars (Açıkyıldız 2015: 177) suggest that when Sheikh ‘Adī arrived in the Sheikhan region, the inhabitants were practising Zoroastrian religion and these shrines were used for their fire ritual.

There is only one baptistery in the Yazidi tradition, the baptistery of the Kanîya Spî (White Spring) in Lalish (Fig. 59). All Yazidis receive their baptism in this place, and they can go there as newborns or as adults, depending on the economic resources of the family.

The building is located to the south-west of the sanctuary of Sheikh ‘Adī; it is part of the religious complex and many rituals and popular dances take place in its courtyard during annual festivals (Açıkyıldız 2015: 178). The building, which has a rectangular plan, consists of three rooms, passageways and antechambers in the form of an īwān. The three rooms are named Kanîya Keçka, Kanîya Kurke and Kanîya Spî: they are respectively the room for the girls, the room for the boys, and the room where people are baptized after a certain age. In the middle of each room there is a square-shaped stone basin where water from the spring is collected. All chambers are barrel-vaulted on the interior and flat-roofed outside: only the Kanîya Spî room is covered by a typical Yazidi dome (Açıkyıldız 2015: 178).

They are located in Lalish, Bozan and Dere Bûn, close to a mausoleum. The most renowned cave is underneath the sanctuary of Sheikh Adī, and it is where the Zemzem spring is, and therefore it is accessible only to Yazidis (Fig. 60). In the cave, Yazidis make berats, which are small balls made of earth from the sanctuary mixed with Zemzem water: these balls are than distributed to pilgrims during ceremonies and festivals.

Yazidi tombstones vary from region to region; the graves share the use of inhumation burial and the position of the dead person’s head, which is placed towards the east. Traditional tombstones are small-sized and are placed in the short side of the grave. Another type is in the form of a sarcophagus and is found mostly in the Republic of Armenia. The most common type resembles a ziggurat and is built of big stone blocks or whitewashed rubble: this type occurs in Turkey and Armenia. Another type of tombstone consists of a simple horizontal rectangular pedestal with two rectangular slabs, triangular or semi-circular on top: these are spread throughout northern Iraq. Zoomorphic tombstones occur in Armenia: they are in the shape of horses, or sometimes rams, sheep, or lions (Fig. 61-62). 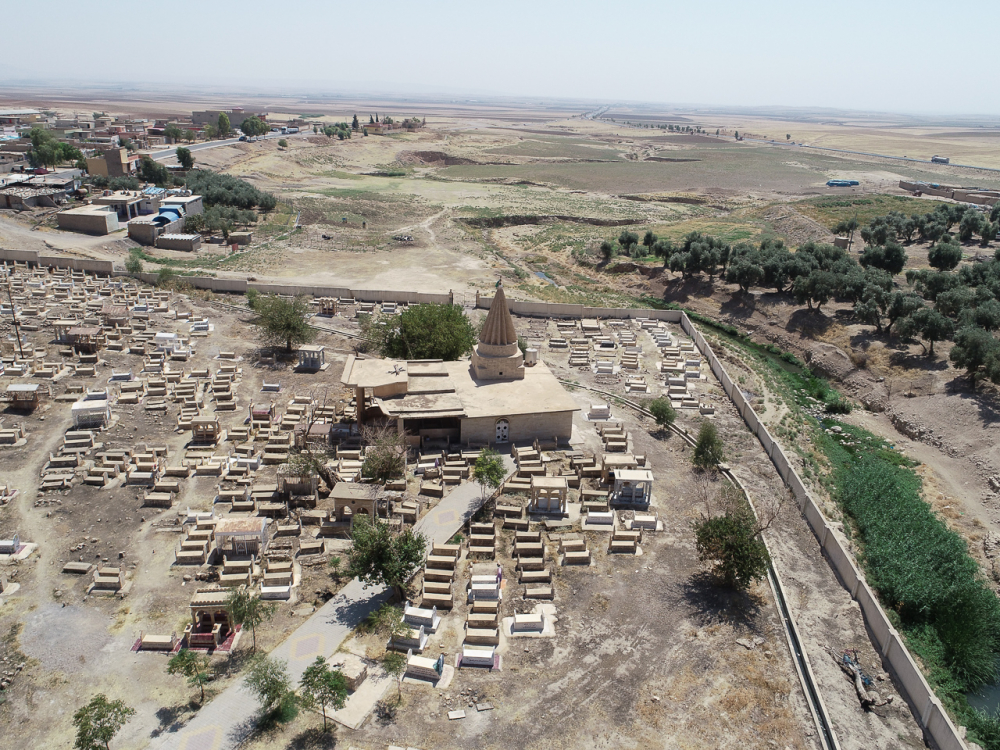 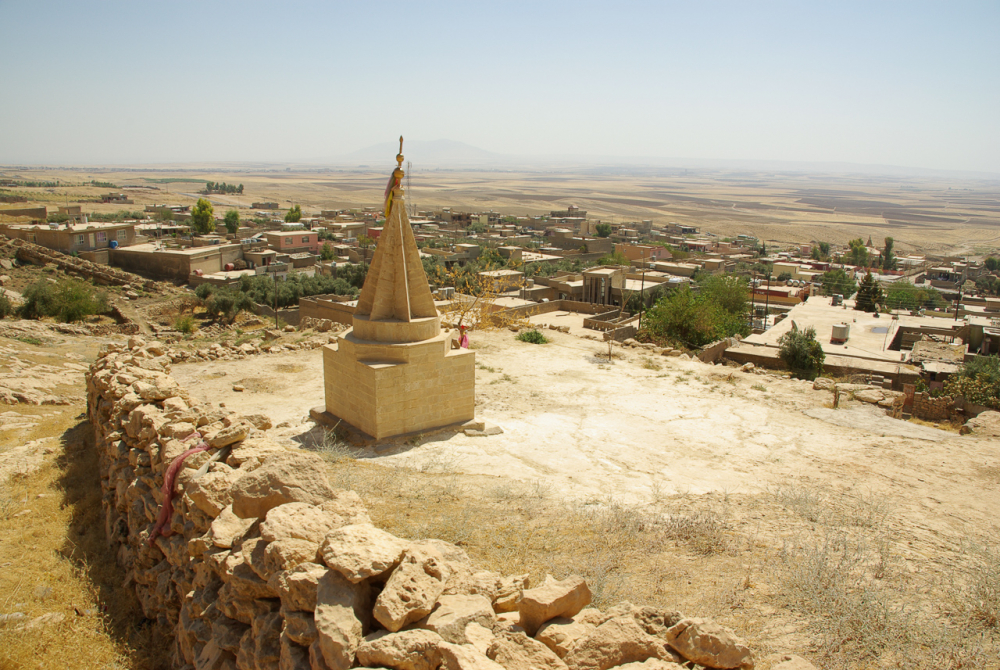 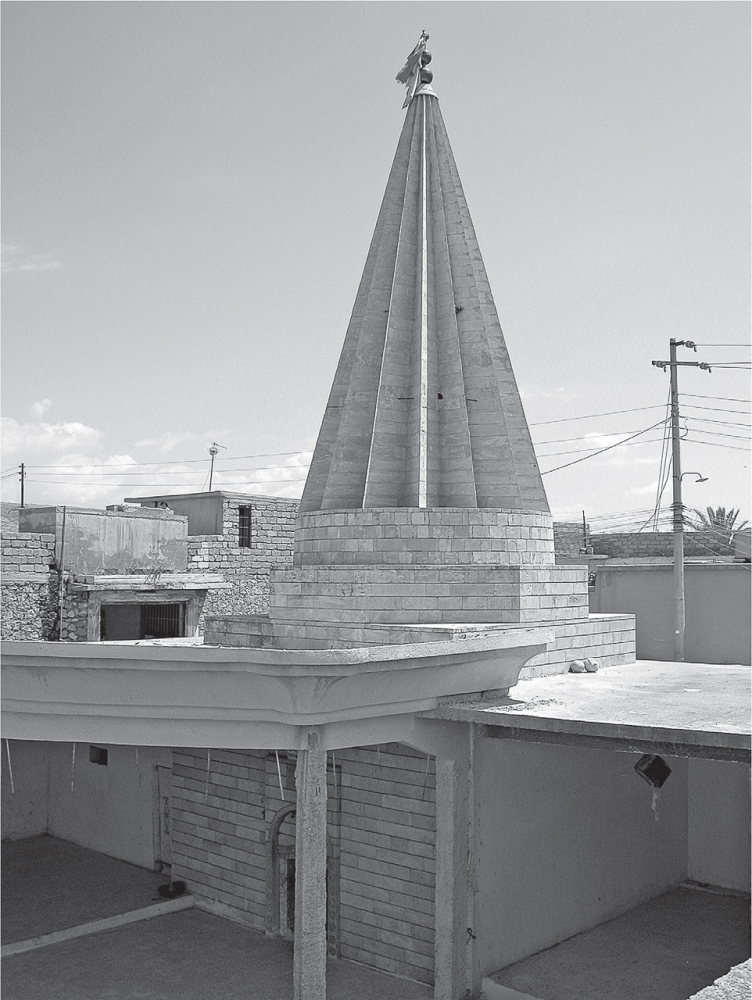 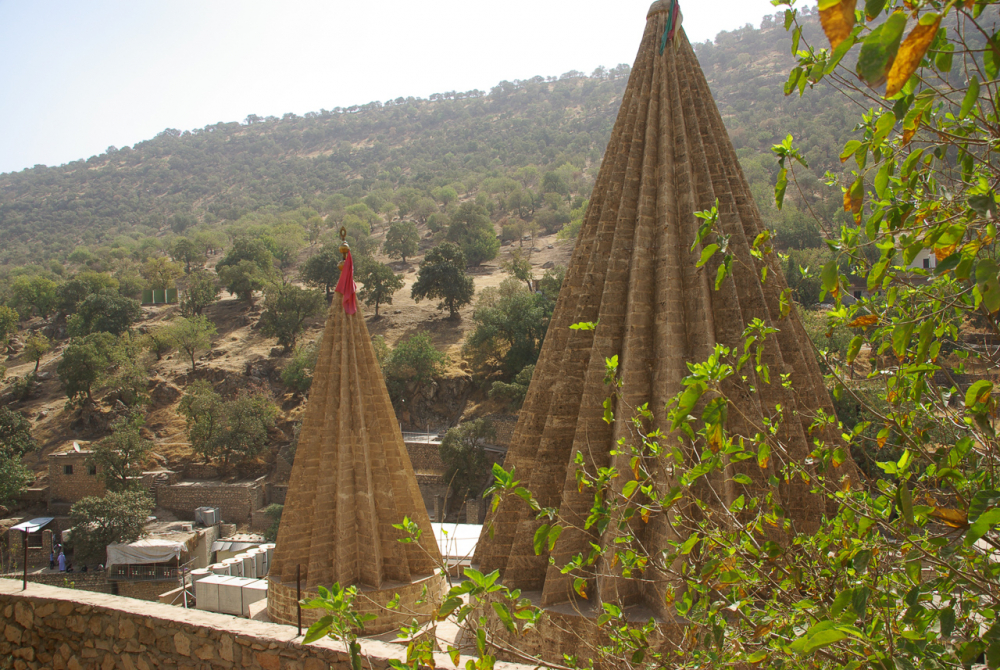 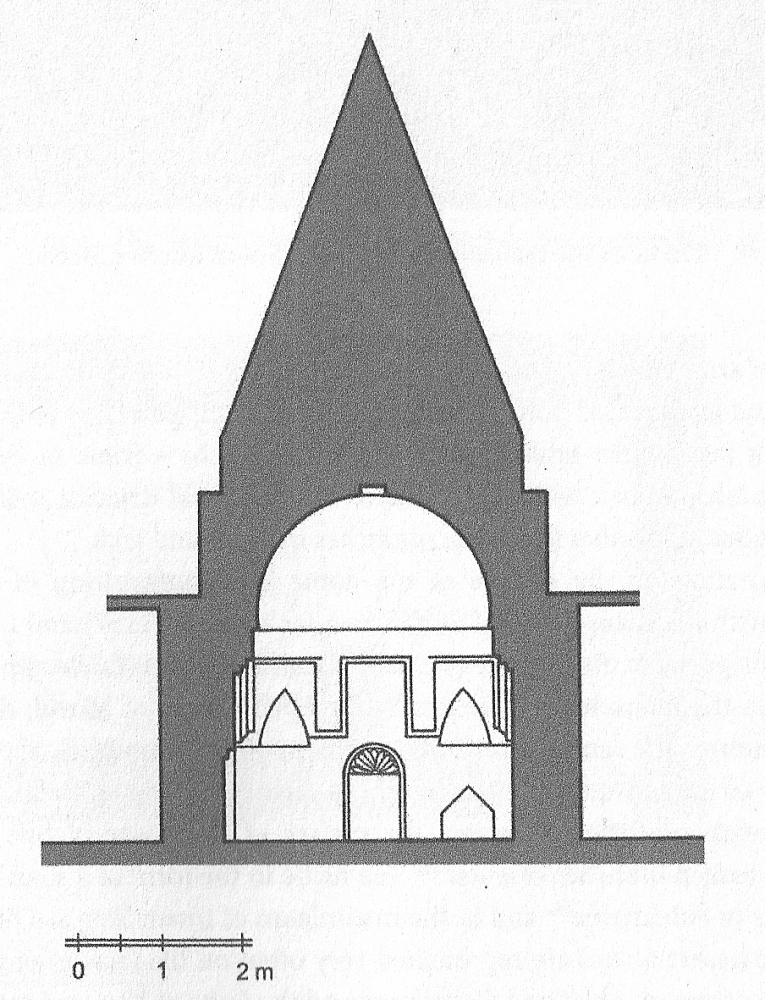 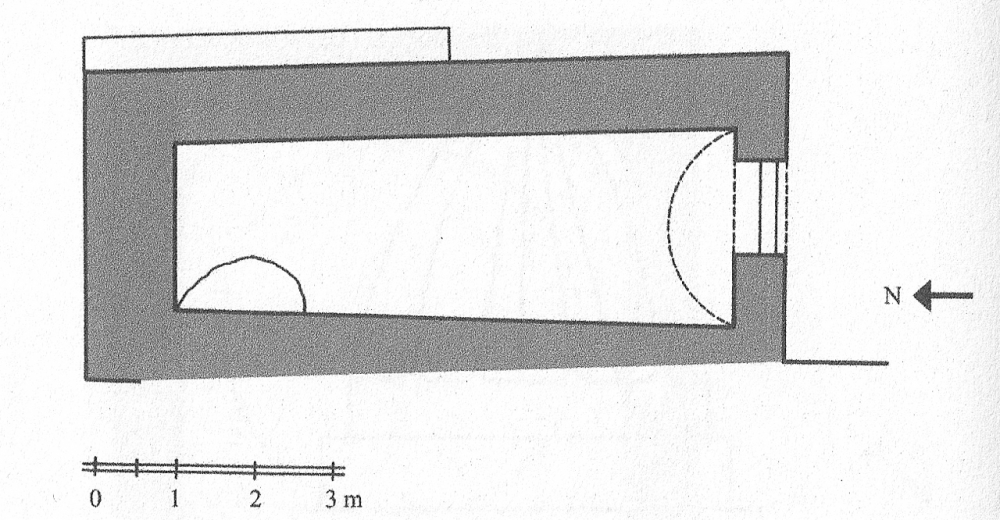 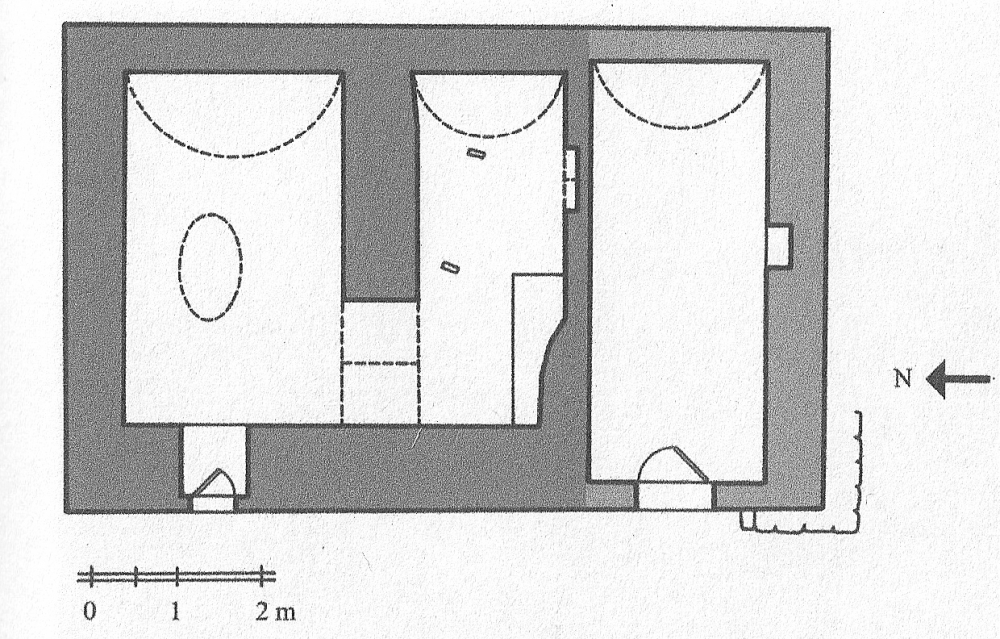 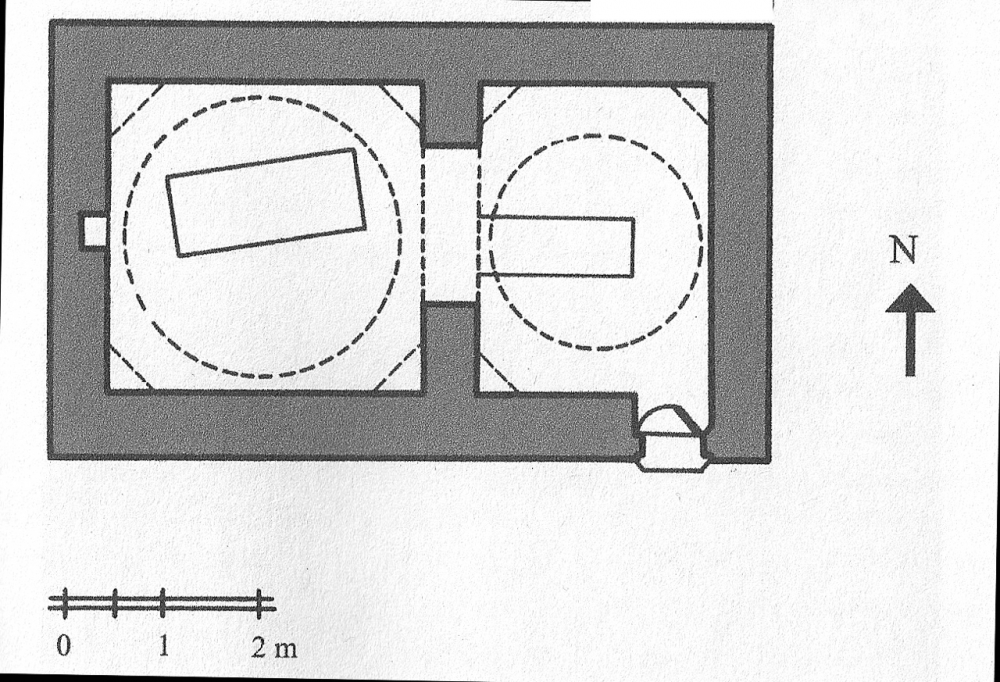 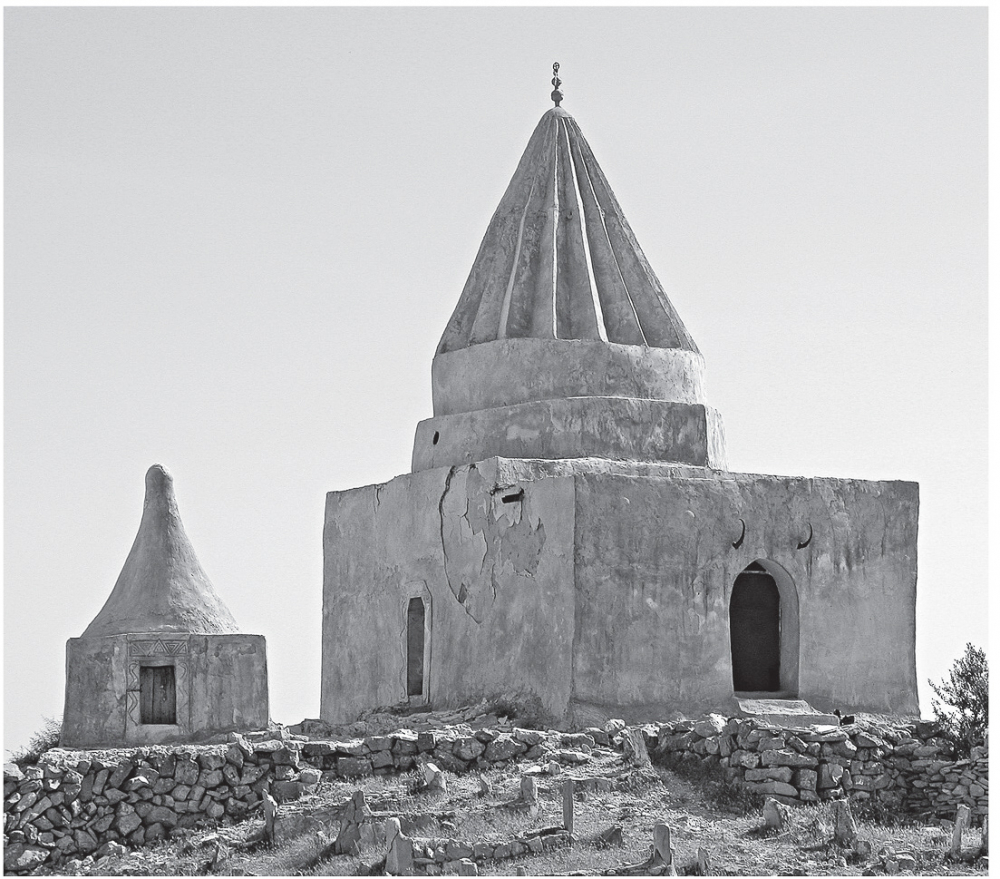 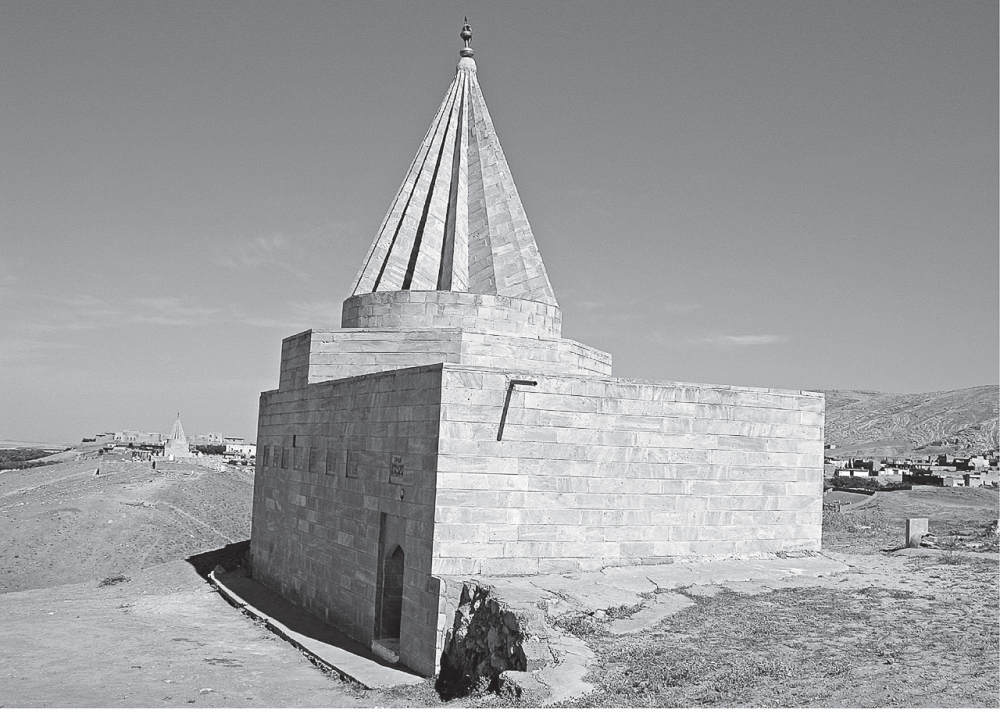 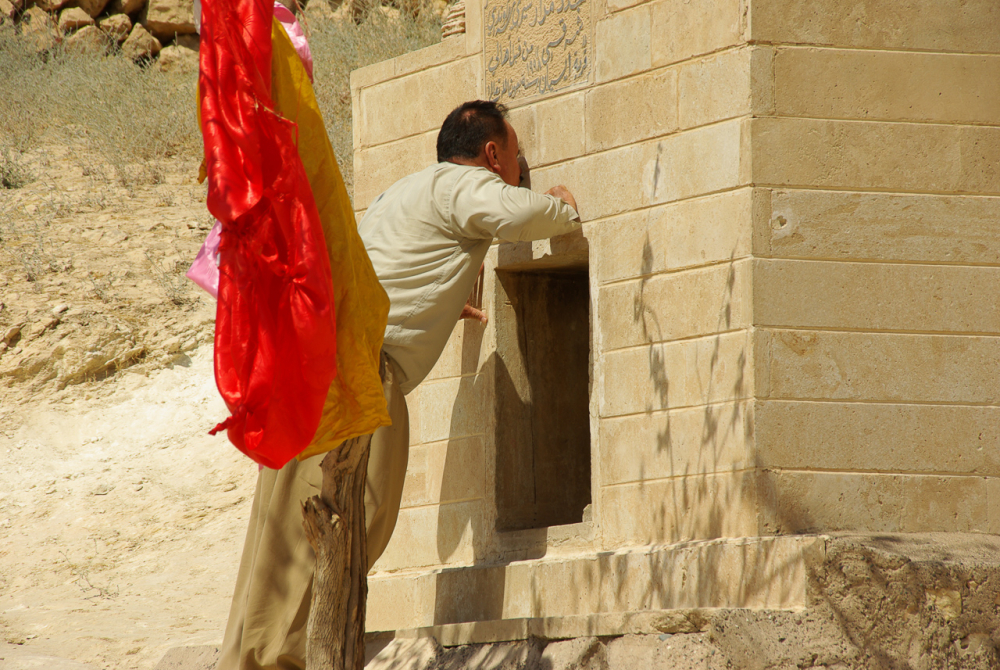 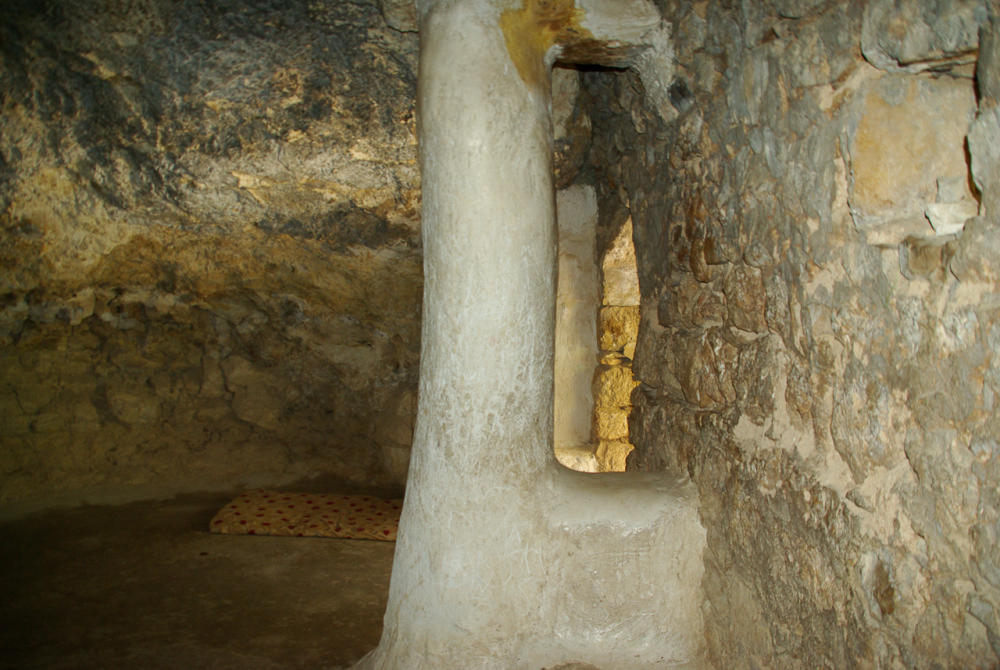 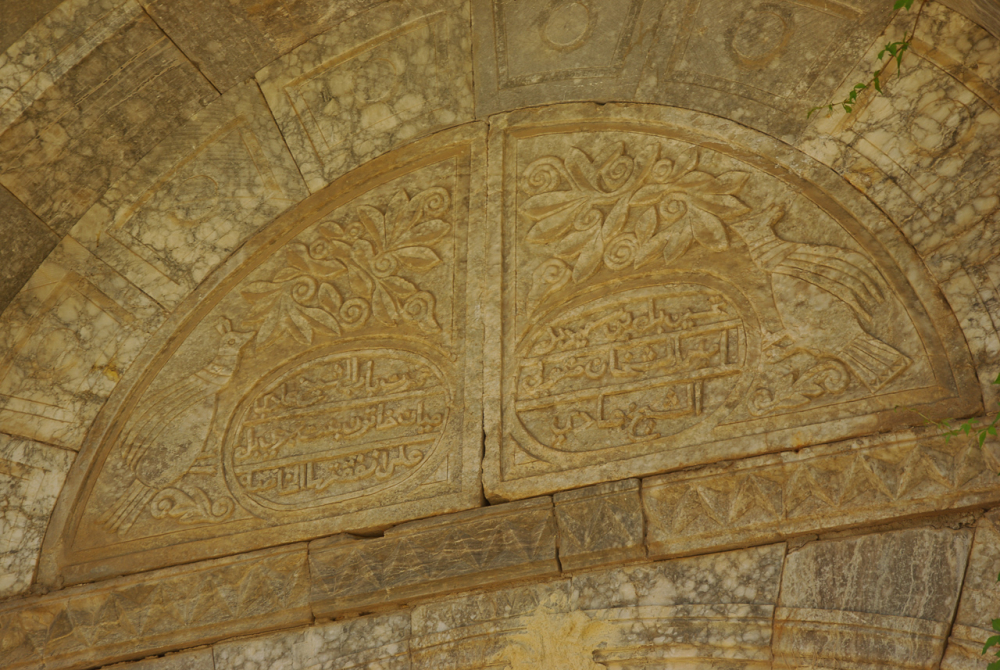 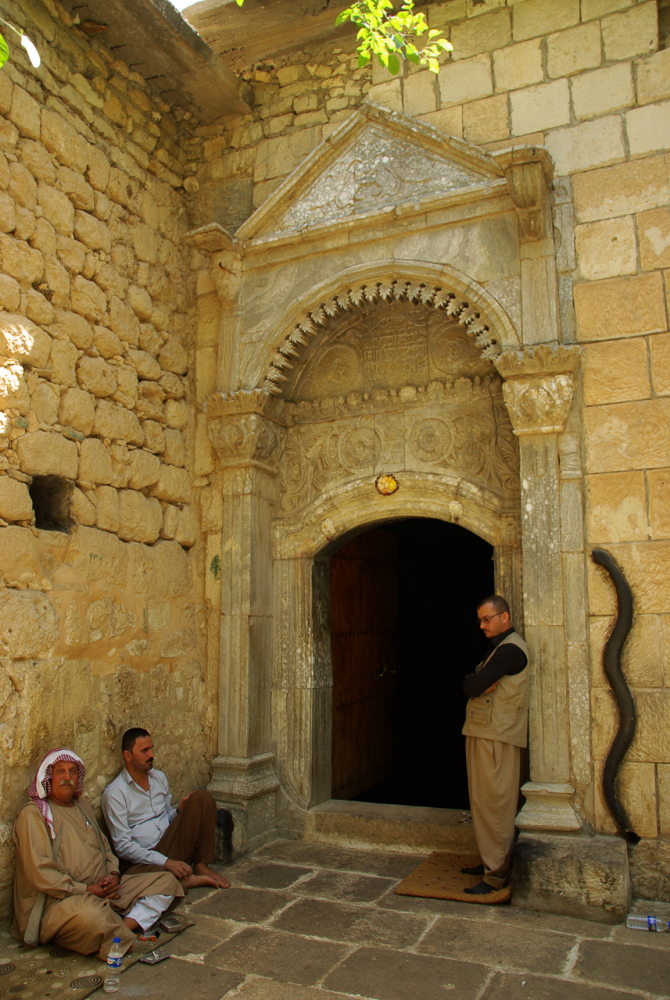 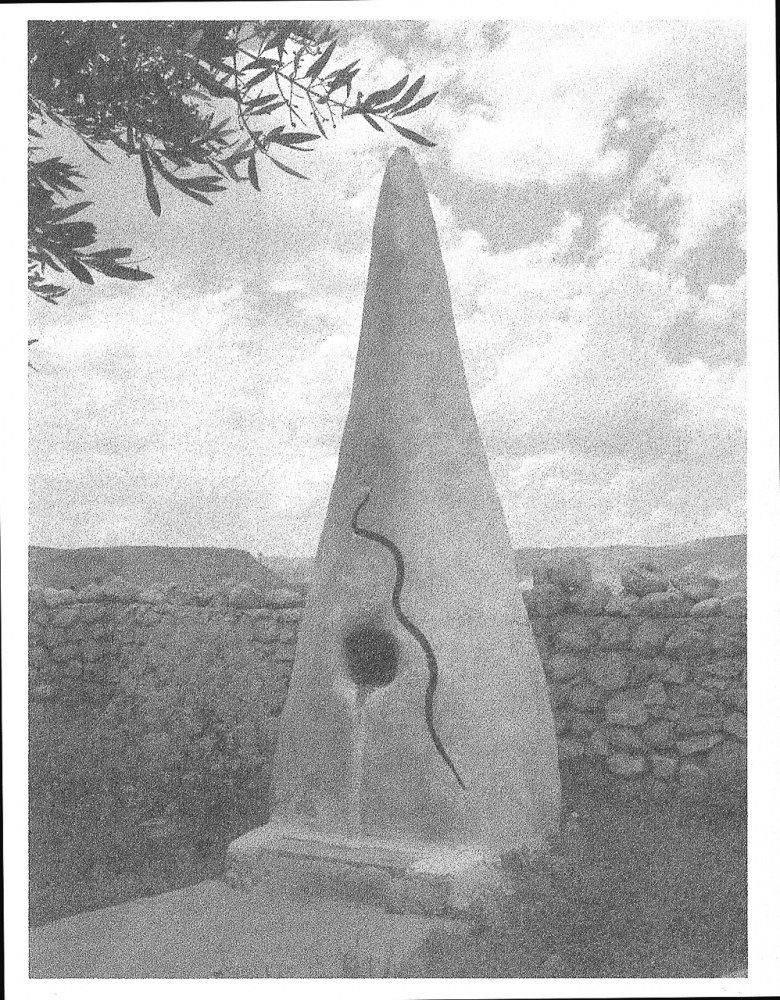 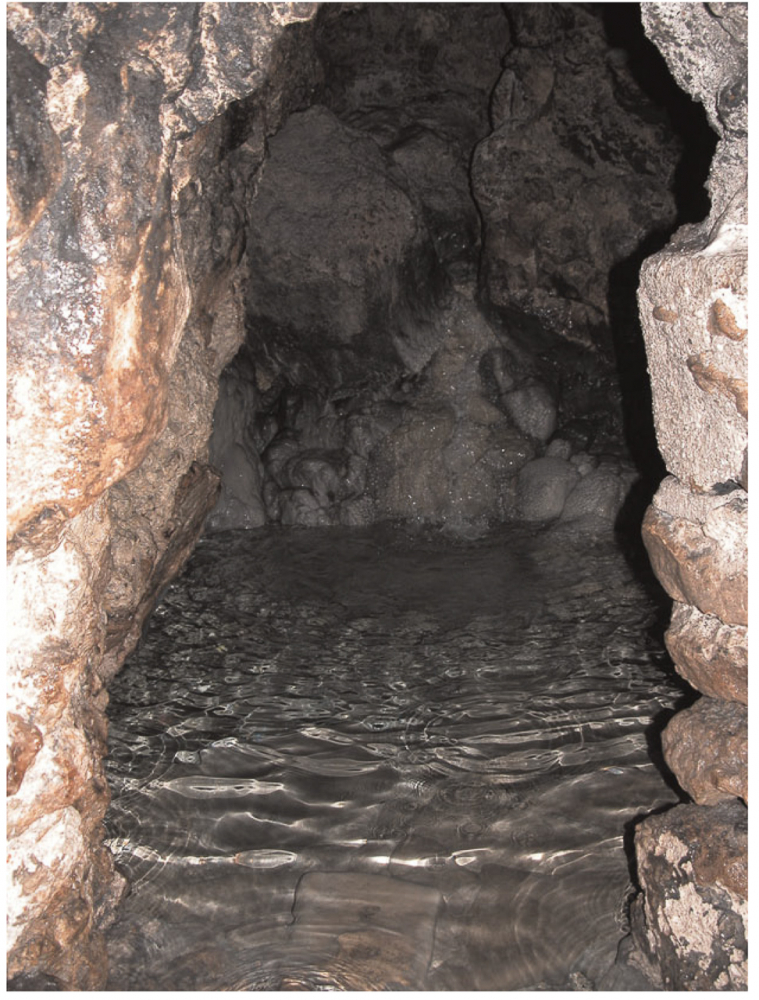 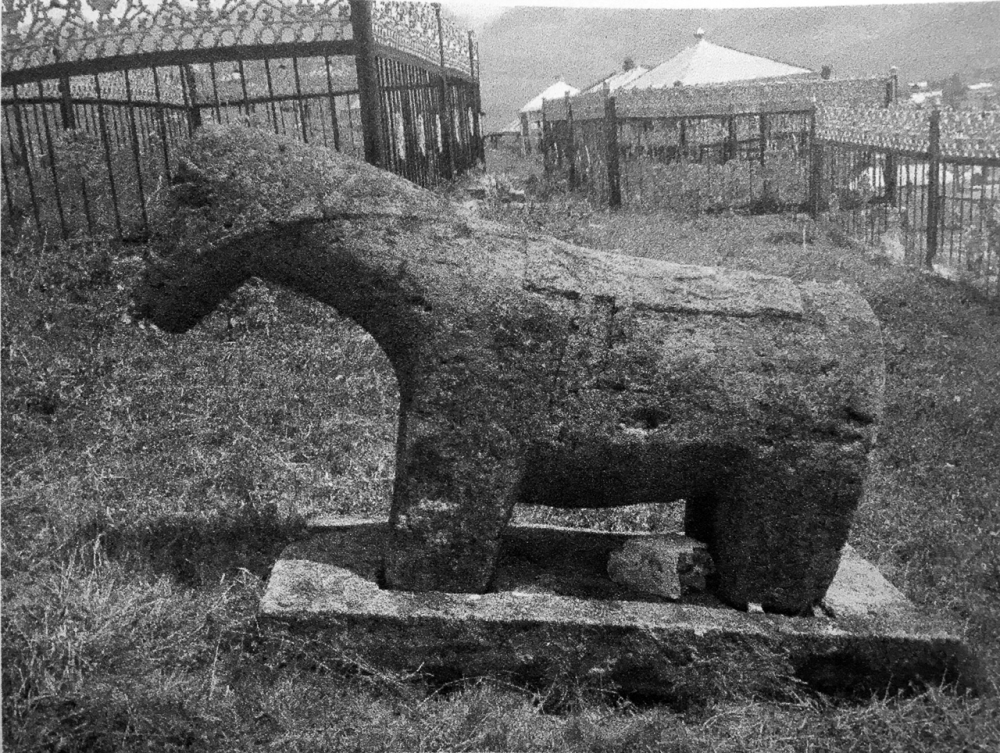 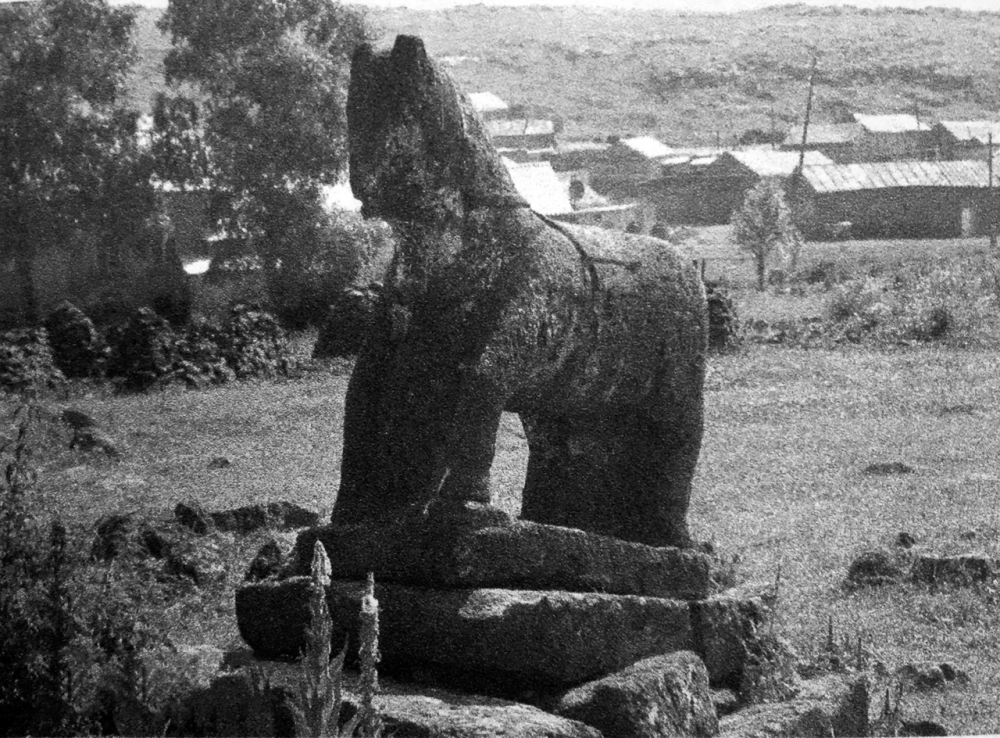